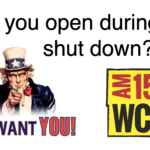 Is your business open during the COVID-19 Illinois stay at home order? Are you working to continue to provide food, professional services, support and other services during this "shut down"? WCKG wants to talk to you! As you probably know, local businesses need help right now but many don't feel strong enough to spend money on marketing and advertising. And yet now … END_OF_DOCUMENT_TOKEN_TO_BE_REPLACED

College Thoughts; LaMelo Injury Update; LeBron MVP; Legendary Defender Tony Allen on Grindin’, ’08 Celtics; Kobe vs. LeBron; Mamba Respect This week, Gottlieb discusses what looks like is shaping up to be a year of parity in college basketball a wide open college basketball season, LaMelo Ball missing time in Australia with a foot injury, and why LeBron is the clear cut … END_OF_DOCUMENT_TOKEN_TO_BE_REPLACED

MLB’s Gas Station Viagra Panic; Astros’ -500 Line; Bill Walton’s MLB Debut This week on Inside the (Rob) Parker, Rob checks in from on the road has he tours ballparks across the country. He has takes on the MLB’s warning to players about using over the counter sexual enhancement drugs, why the upcoming player weekend is good for the game, Vegas making the Astros -500 favorites … END_OF_DOCUMENT_TOKEN_TO_BE_REPLACED

Some of you may know that Bears Head Coach Matt Nagy was a helluva college quarterback at Delaware, where he held a bunch of school passing records until Joe Flacco showed up on campus. Today at Bears camp, Nagy dipped into the old bag of tricks and uncorked about a 40-yard strike for a TD to Anthony Miller, beating man coverage from Prince Amukamara. Looks like the old man can … END_OF_DOCUMENT_TOKEN_TO_BE_REPLACED

Jeopardy! champ James Holzhauer has looked unbeatable while racking up show earnings in excess of $2.4 million during his 32-game winning streak, but according to a leaked video clip, he’s about to go down tonight. The clip, originally reported on by HuffPost, shows the 34-year-old professional sports gambler getting outfoxed in Final Jeopardy by Chicago librarian Emma Botcher, … END_OF_DOCUMENT_TOKEN_TO_BE_REPLACED