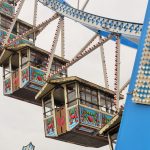 Wood Dale officials say they have a new emergency response plan in place after two people were killed and 22 others injured when high winds from a fast-moving storm knocked over a tent at last year's Prairie Fest. But they say they won't share them with the public because of unspecified concerns over security. The annual festival opens its four-day run Thursday evening at … END_OF_DOCUMENT_TOKEN_TO_BE_REPLACED