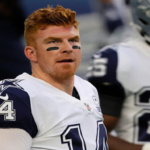 Andy Dalton is signed to a 1-year deal after the Chicago Bears made a public display of pursuing Russell Wilson. What were the Bears thinking?   The Chicago Bears made a very public display of their pursuit of Russell Wilson, but on Tuesday they instead signed Andy Dalton to a 1-year deal. Ben Maller says this is a MAJOR disappointment for the Bears and wonders … END_OF_DOCUMENT_TOKEN_TO_BE_REPLACED