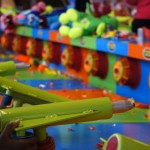 The Village of Bensenville and Bensenville School District 2 presented a check for $2,177.29 to the Bensenville Youth Coalition. The funds were raised from a carnival held in downtown Bensenville in mid-May 2016. The event brought thousands of guests to downtown Bensenville. "Maintaining a great working relationship with all of our taxing bodies is critical in making … END_OF_DOCUMENT_TOKEN_TO_BE_REPLACED