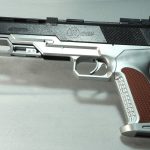 A man with a BB gun faces charges following an incident at an apartment building at 1407 E. Roosevelt Road last weekend that forced police to close down a nearby roadway, according to Suburban Life Publications. The name of the man and the charges have not been released. Police were called to the area after receiving a report of a man with a gun in the area Saturday evening, … END_OF_DOCUMENT_TOKEN_TO_BE_REPLACED