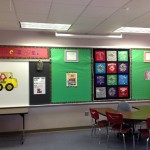 The parent of a 9-year-old girl who attends Lincoln Elementary in Wheaton said fourth graders were learning about the Civil War right before spring break. He said some of the students "were made to pretend to be slaves" as part of the lesson plan. ... He said if the students pretending to be slaves were caught, "instead of being whipped, they were made to dance in front of the … END_OF_DOCUMENT_TOKEN_TO_BE_REPLACED