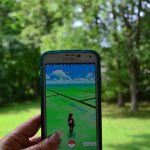 If you’re walking around Naperville looking for Pokémon to catch, you need to watch out where you do it, not just for your own safety, but because some businesses might not want you there. Edward Hospital is one of them. "We are in the process of requesting that Edward-Elmhurst Health's main campuses – Edward Hospital in Naperville and Elmhurst Hospital – be removed as … END_OF_DOCUMENT_TOKEN_TO_BE_REPLACED