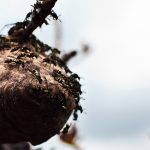 A female postal worker was taken to the hospital after being stung multiple times by Hornets while out on her mail route in Wheaton. The woman was delivering mail in the 900 block of Dartmouth Drive when she was attacked by the Hornets. Witnesses told ABC 7 Chicago landscapers were removing the nest from a tree at the same time that the postal worker was walking by. The … END_OF_DOCUMENT_TOKEN_TO_BE_REPLACED