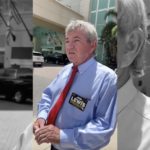 TAMPA, Fla. — Jim Lewis, Democratic candidate for Attorney General of Florida, ruffled some feathers during a Moms For Liberty protest this past weekend. Attendees chanted, “Abortion is a human right. Fight! Fight! Fight!” as they marched near the Samaria Cafe in Tampa, Florida. Lewis was seen talking with the crowd before being asked about his personal stance on the … END_OF_DOCUMENT_TOKEN_TO_BE_REPLACED