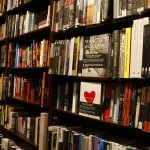 Musician Bobby Brown, but probably best known for his ill-fated marriage to the late Whitney Houston, will be at Anderson’s Bookshop to promote his new book, “Every Little Step.” Brown will appear at 7 p.m. June 17 at Anderson’s Bookshop, located at 123 W. Jefferson Ave.  Brown, who first hit the world of pop culture as a member of New Edition, went on to break out on his … END_OF_DOCUMENT_TOKEN_TO_BE_REPLACED